Airlines all across the world were left largely idled by the coronavirus crisis, forcing the retrenchment of a large number of workers who were left to find alternative work.

Rhinold Cameron is one of them. He once served as flight attendant with LIAT Airlines, today, he is the owner of his own business — Cameroon’s Fast Carriers.

It was while stranded in Barbados in a hotel that LIAT served noticed that he was being laid off. It was the defining moment for him.

“It was explicit that I would not have been earning for as long as I was laid off and that was a huge spoke in the wheel for me,” he said.

Cameron, a father of two, had a third child on the way. But there was more devastating news – the baby did not survive.

With that grief to deal with and out of a job, Cameron had to think of something to bring in income, and fast.

“I was laying there toying with tons of ideas, day in and day out, but this one stood out to me.” 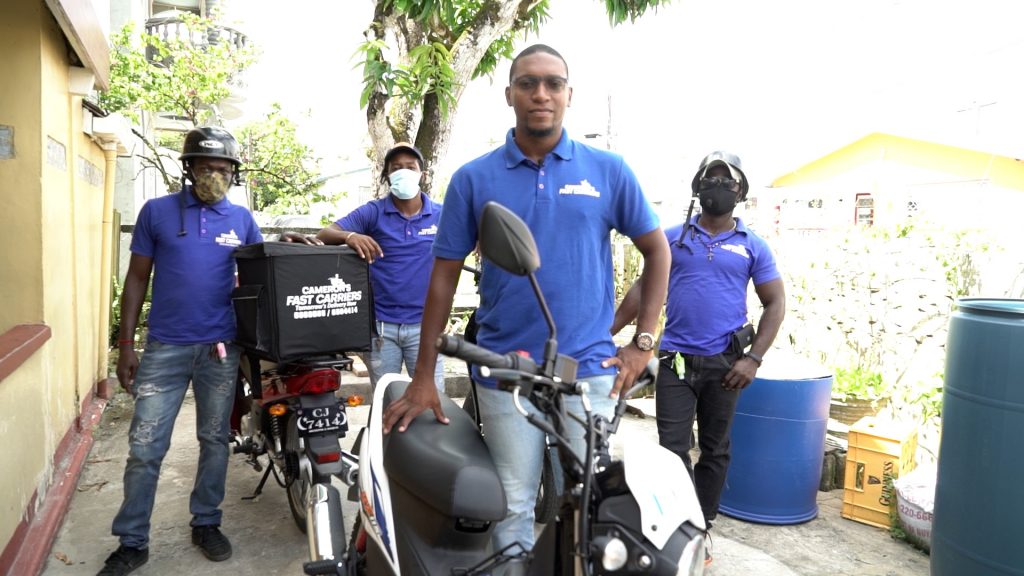 He returned home three months later to Guyana to a market that was already saturated with other delivery services. But he had already done his own research and with the support of his family and colleagues he went ahead with the business, launching it from the living room of his home.

“Based on the situation where everyone was locked down, I knew there was room for everyone. Initially, I did think about the competition and the market is saturated but even with the seasoned competition as a newbie I had to make ends meet.”

“I have seen improvements from July to now. Currently, we have four riders – two with their own motorcycles and two belonging to me. We also utilize the services of a car,” he explained.

“We started out with the basics, food delivery and grocery shopping, water and gas delivery… but of recent I realize we are doing a lot more than that.

“We are taking people’s cars to the cars wash and we are paying bills,” he added.

Cameron says his business has grown tremendously since he started and he now has the task of building on established efficiency, workforce, and customer base.

He believes too that there will always be a need for this business, a growing need, in fact, even post COVID – 19.